Where do you go for holidays during a pandemic, when international travel is a bit hit-or-miss, and there seems not to be enough time to fit in a full week away somewhere? For us, that meant a four-hour drive to the north west of Scotland.

It’s been thirteen years since our last trip to Achiltibuie – the last time we went was for my husband’s 30th, with his family (he’s 43 now) so it was definitely time to make a return, even without the trials and tribulations of coronavirus.

So, where exactly is ‘Booie’, as we’ve come to affectionately call it? From Dundee, you make your way up the A9, past Inverness and then head across, to Ullapool, and you’ll almost be there. Another 15 miles on a winding, single track road and you’ve made it to the series of villages and towns that form Achiltibuie, which is a village of its own but seems to be the name referred to for them all. Specifically, we stayed in Polbain. 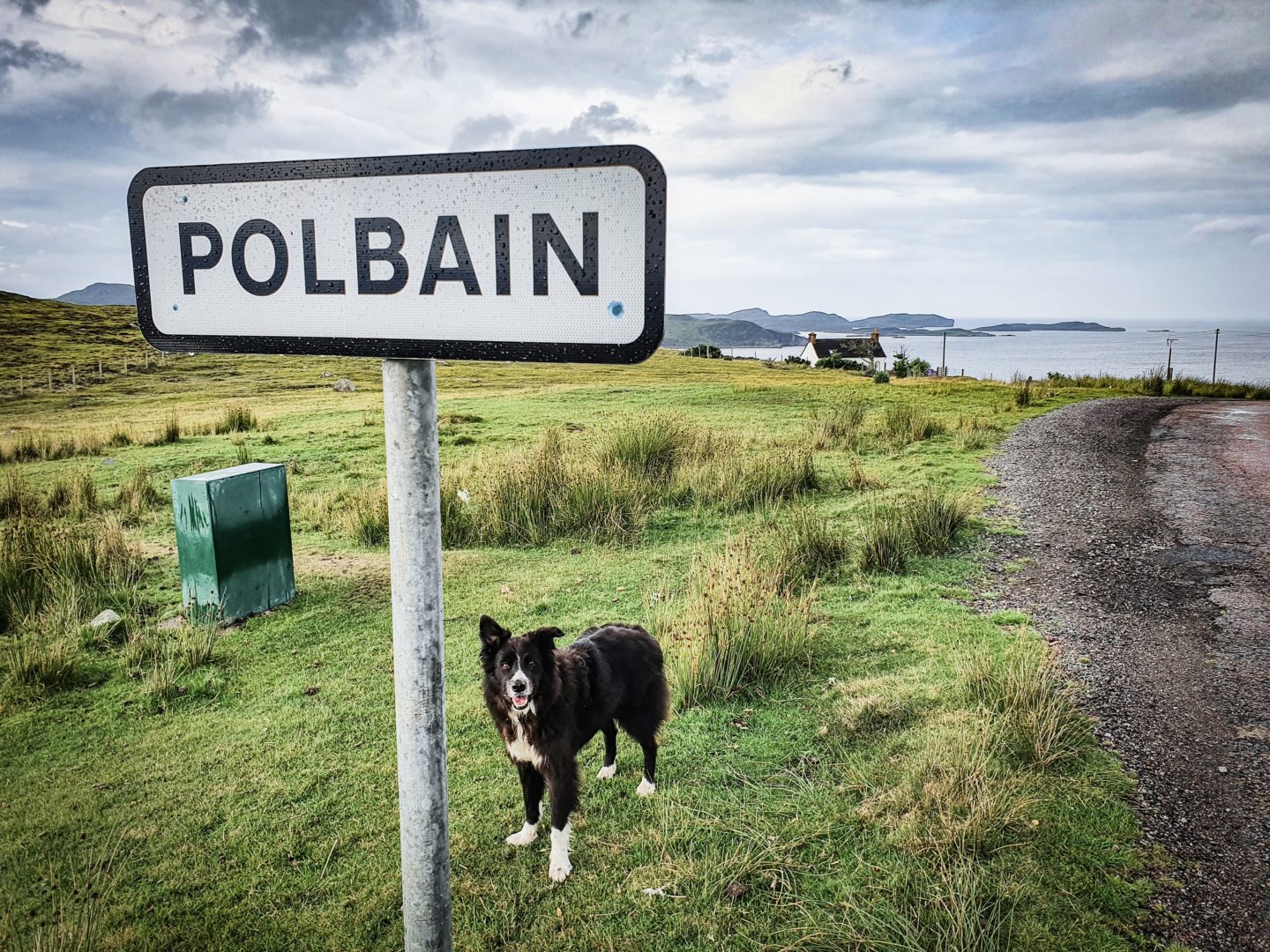 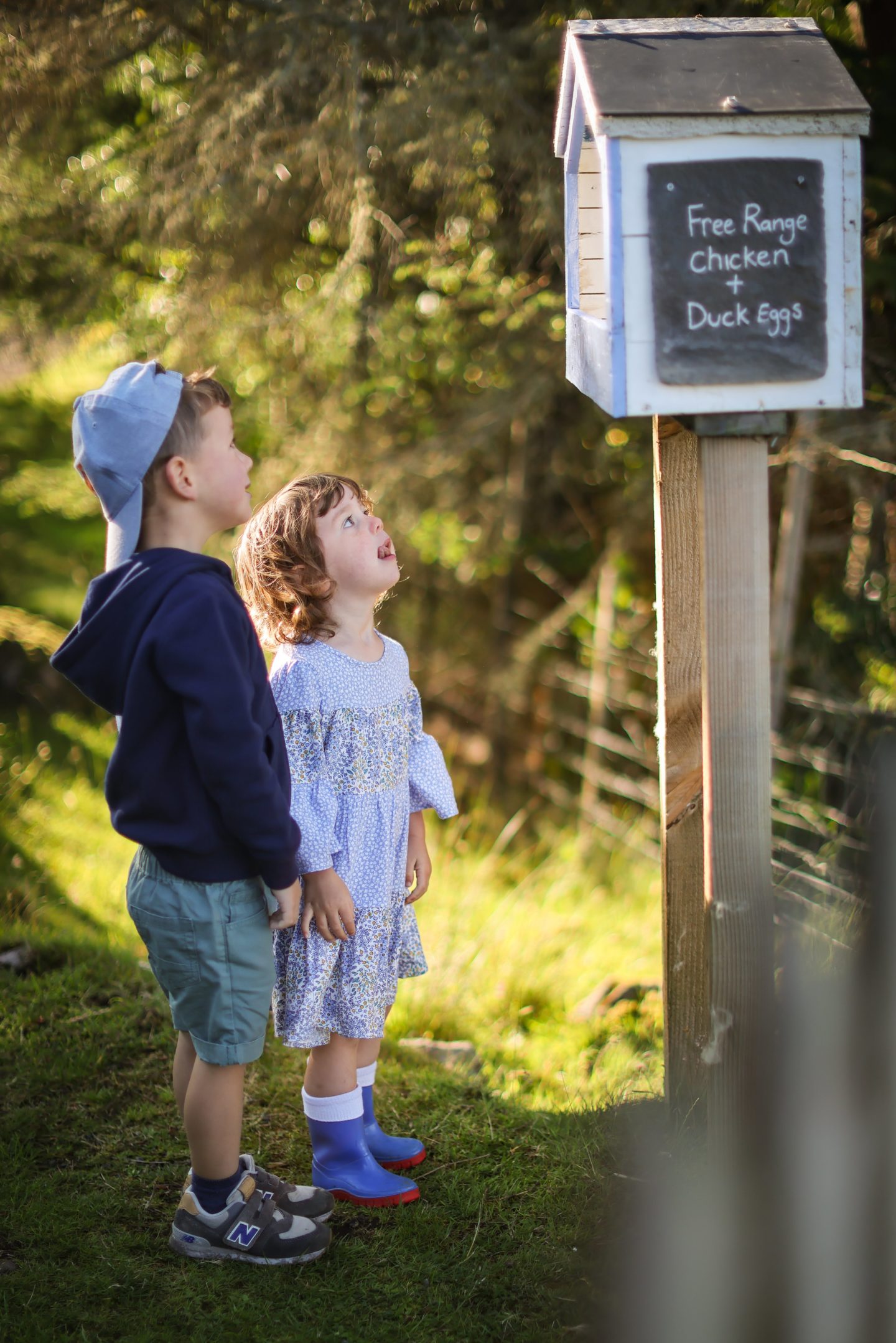 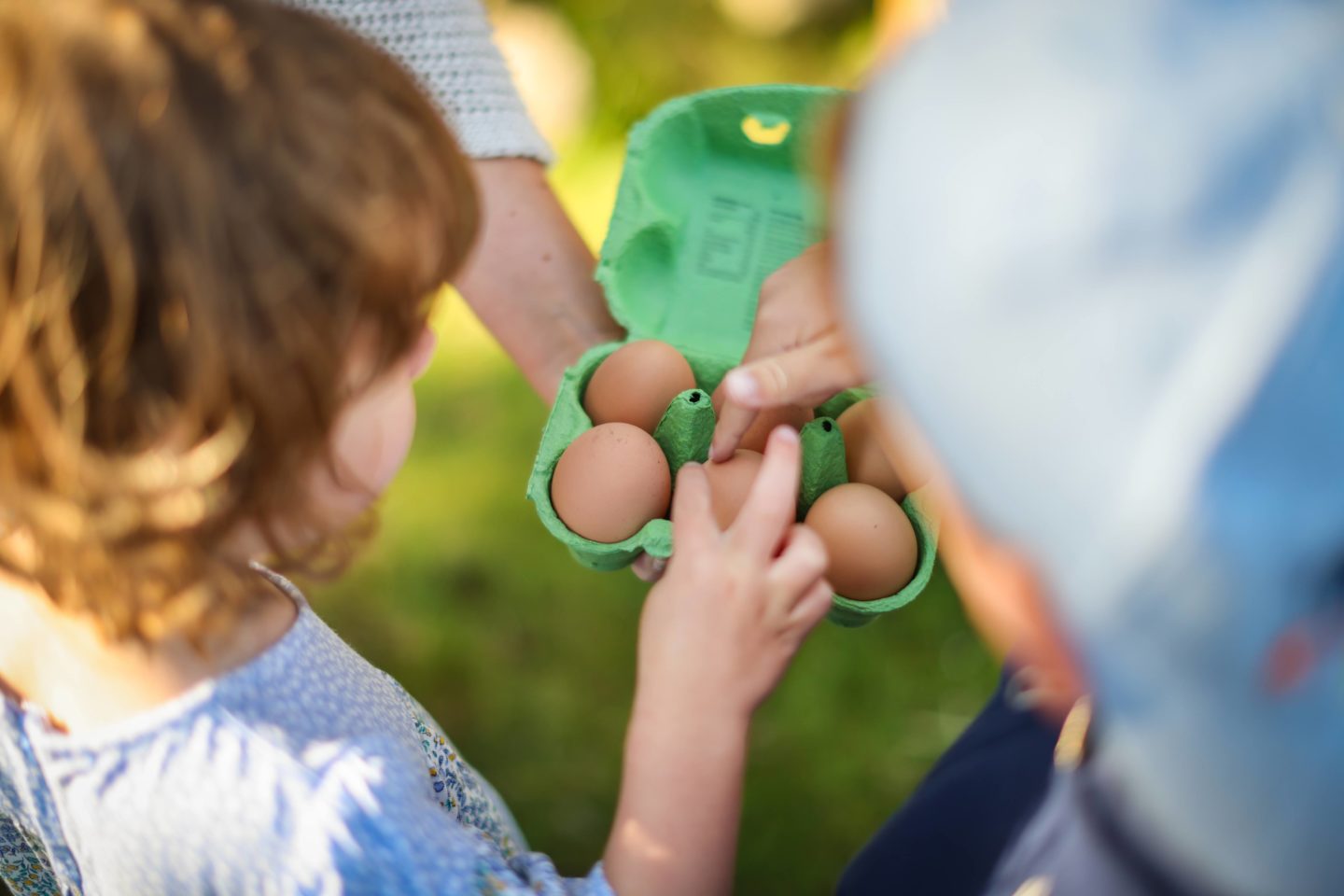 The house we stayed in is set up on a hill, back from the single-track road, and it overlooks fields that are frequently visited by deer and stag come dusk. The view leads out over the water to the Summer Isles, mainly Tanera Mor which was bought a few years ago by British financier Ian Wace (husband to model and activist, Saffron Aldridge), who has revealed interesting development plans.

A three-bedroom bungalow with a bath – no shower – an open fire, and an old but perfectly kept kitchen all made for an appropriately rustic yet entirely comfortable experience. We spent our time there in the garden (there was even a tree swing for the kids), reading (I actually had time to read an entire book in just three days), playing (mostly make-believe but also animal figurines, and building Lego), and drinking the Bollinger I hadn’t got round to opening on my birthday (June). It felt very special to have time as a family of four without the distraction of domestic duties, work, appointments, etc – something we wouldn’t have managed had we stayed at home.

We didn’t eat out, mainly because we were only there for three full days but partly because restrictions were still in place and timings didn’t work easily for us. However, we’ve eaten out in Achiltibuie in previous years and two recommendations would be The Summer Isles Hotel and Am Fuaran. Fancy seafood or good pub grub, what more do you need. 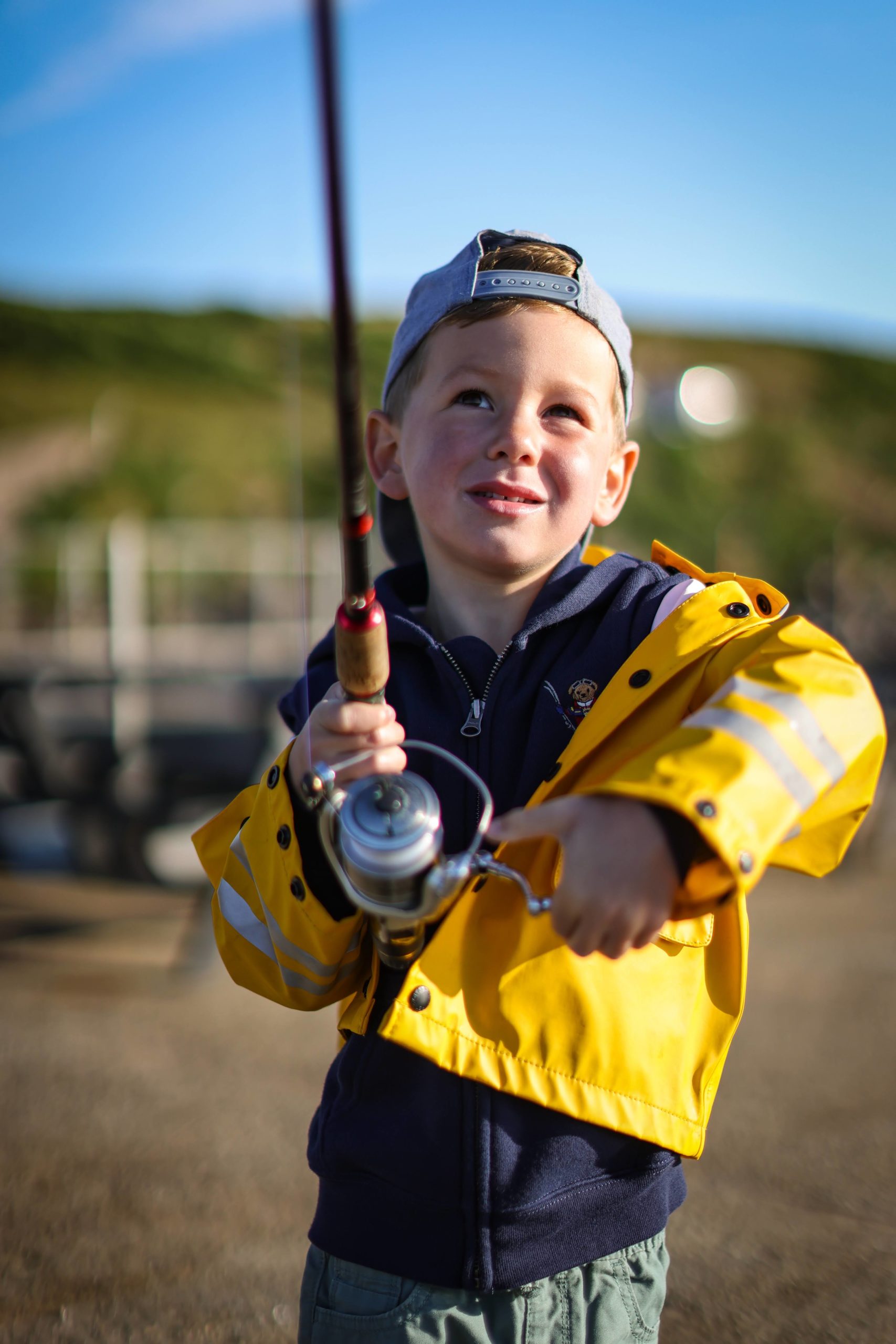 However, Kris did take Nathan to Badentarbet pier (a couple of minutes down the road) for his first proper fishing trip, so we did eat fresh fish while we were up North. The pier is ideal for catching fish – Kris went a few times and caught several, most of which he threw back… but the ones we did cook were very, very good. 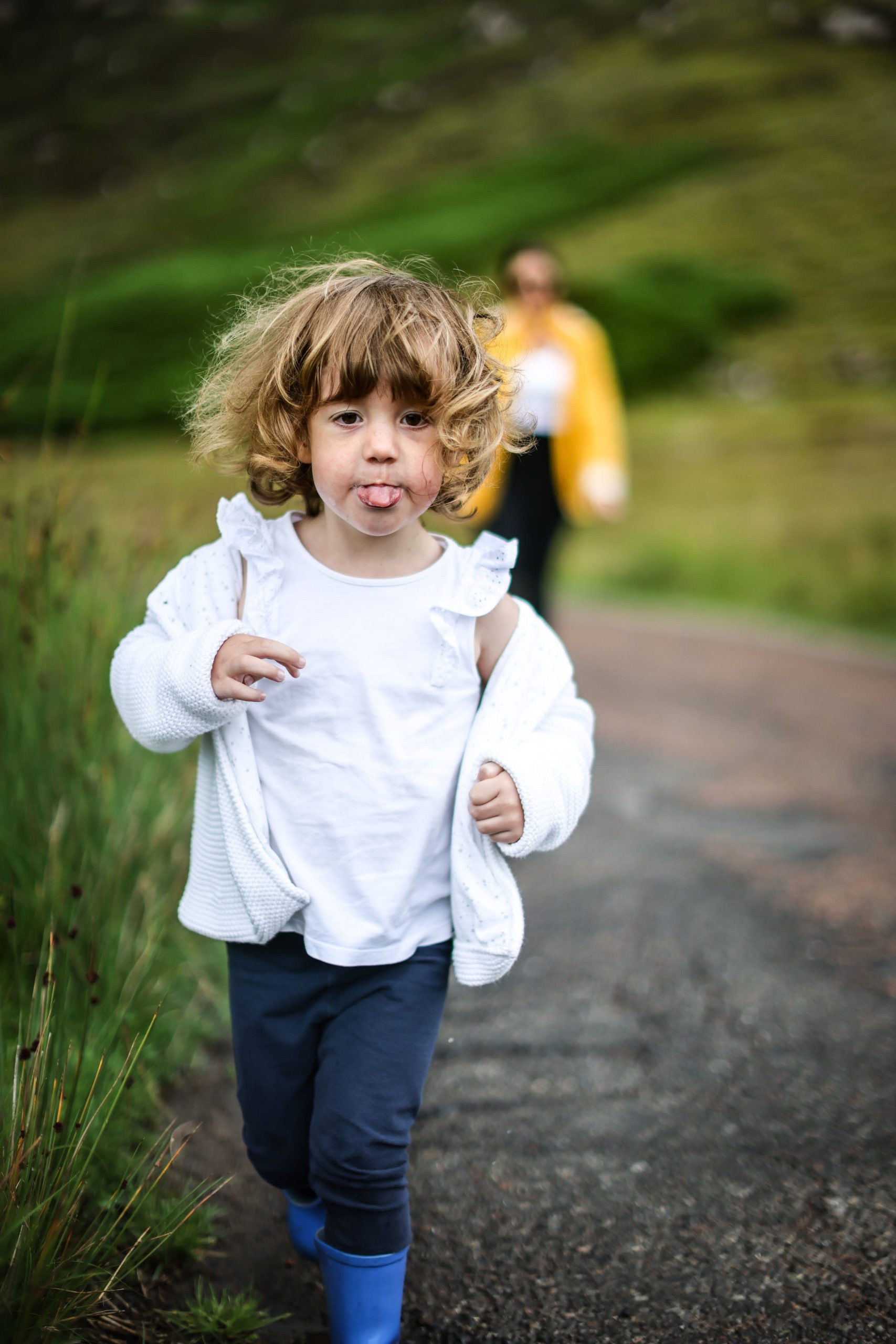 The harbour is fun for exploring. The kids loved splashing in the puddles and water, looking at all the boats on the shore and the beach. It’s a really nice walk, if you go from the harbour, round the point and back to Polbain. You’ll come across stony beaches, rocks for clambering on, a ruined croft, and lots of wildlife, with a chance of seeing otters. It’s worth exploring, but bear in mind that it is a working harbour so watch out for trucks, lorries, tractors, cars, boats – all sorts!

The north of Scotland has many beautiful beaches, and we visited two during our visit. Badanscallie (perhaps a ten minute drive from our house in Polbain) took about ten minutes to get to on foot, downhill from the car park (remember you’ll be heading uphill on the return leg, so don’t take what you can’t carry back – for example, two tired kids). It’s a fairly scenic walk down to the beach, with small waterfalls into the running stream. You arrive at a stony beach which gives way to a long stretch of sand, rocks ideal for clambering over, and a sharp, short shore that soon becomes dark, cold sea. It’s a beach that’s great for exploring, and it’s pretty secluded too. Like many of the beaches in the area, there’s plenty of space for everyone so it never feels overly busy. 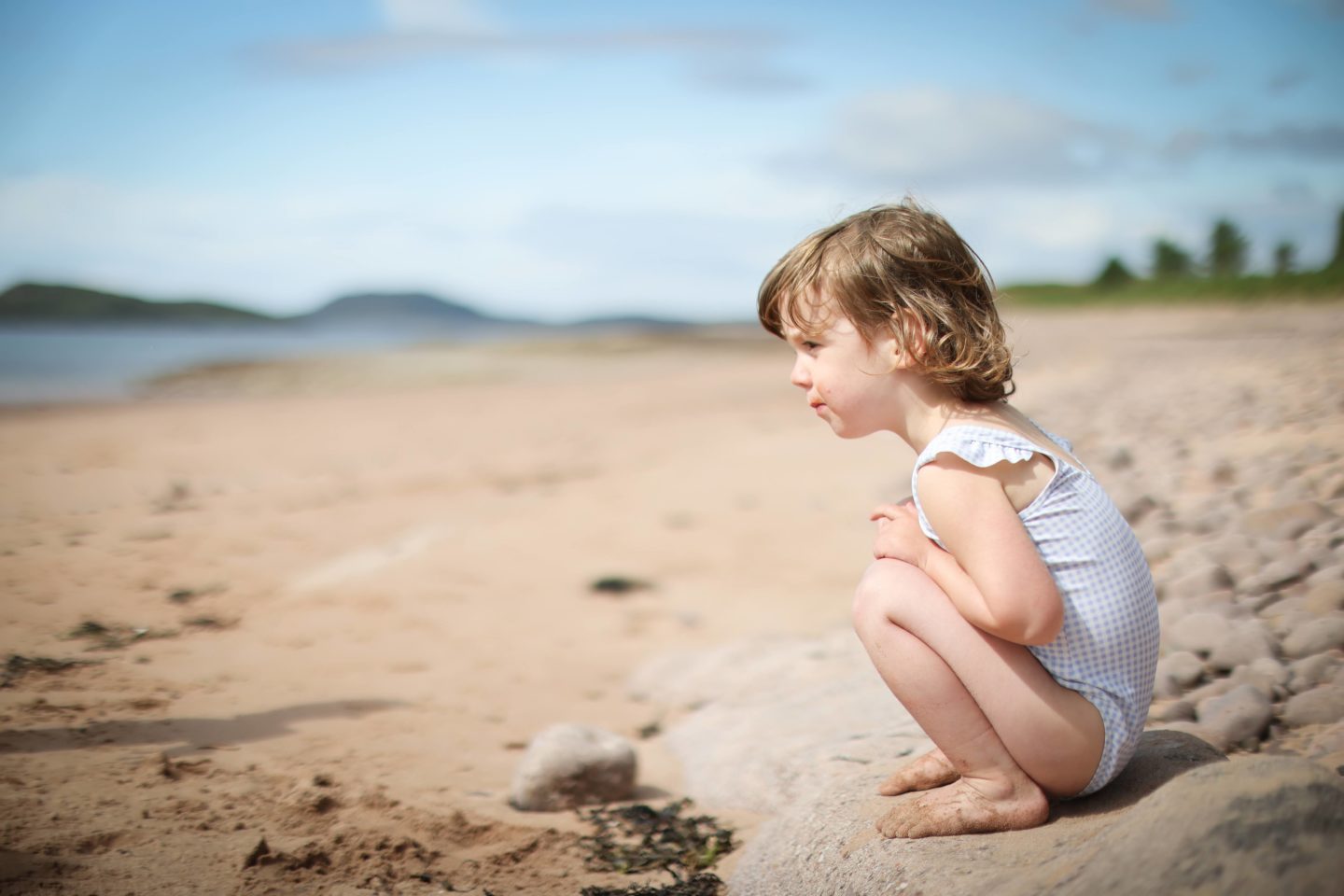 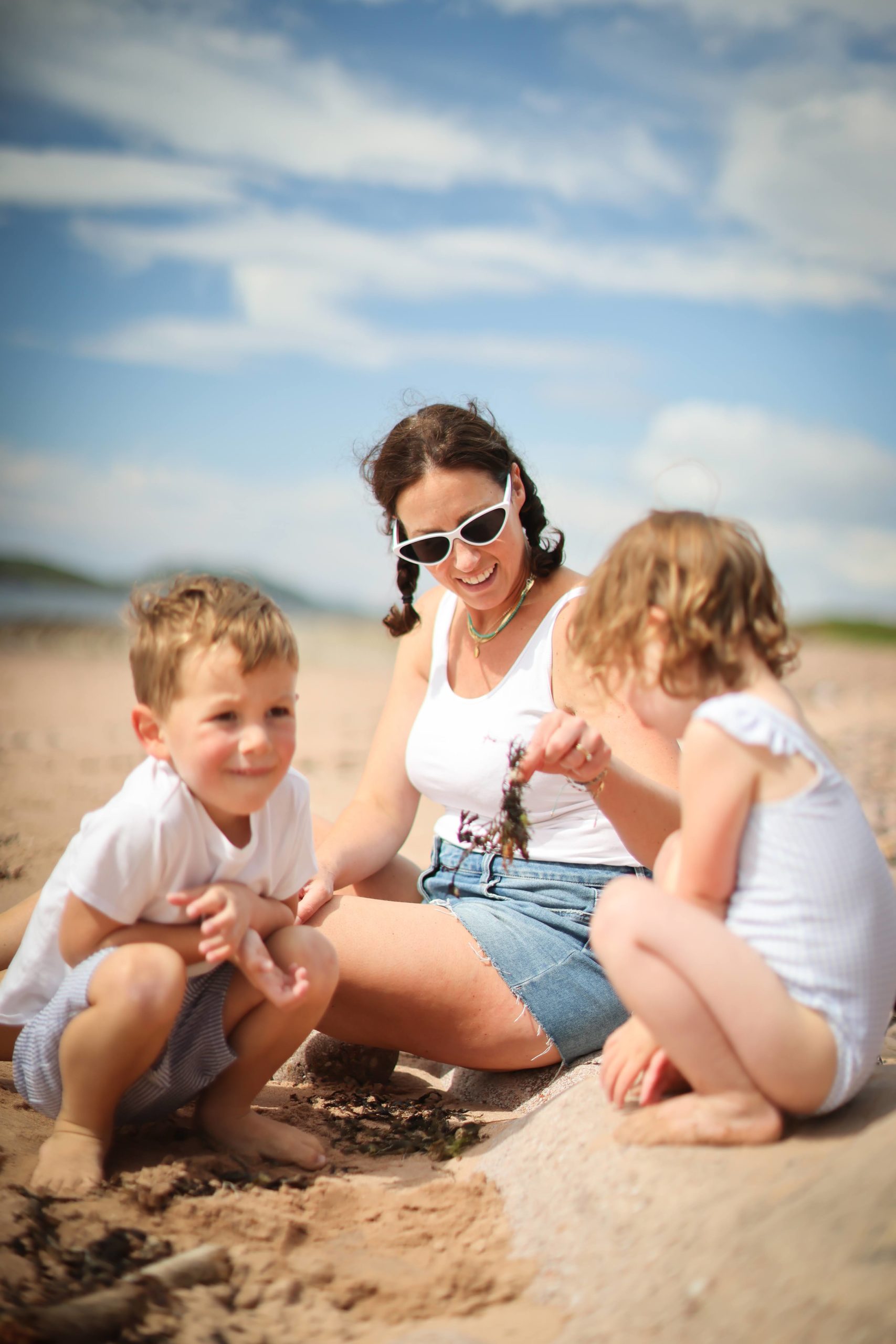 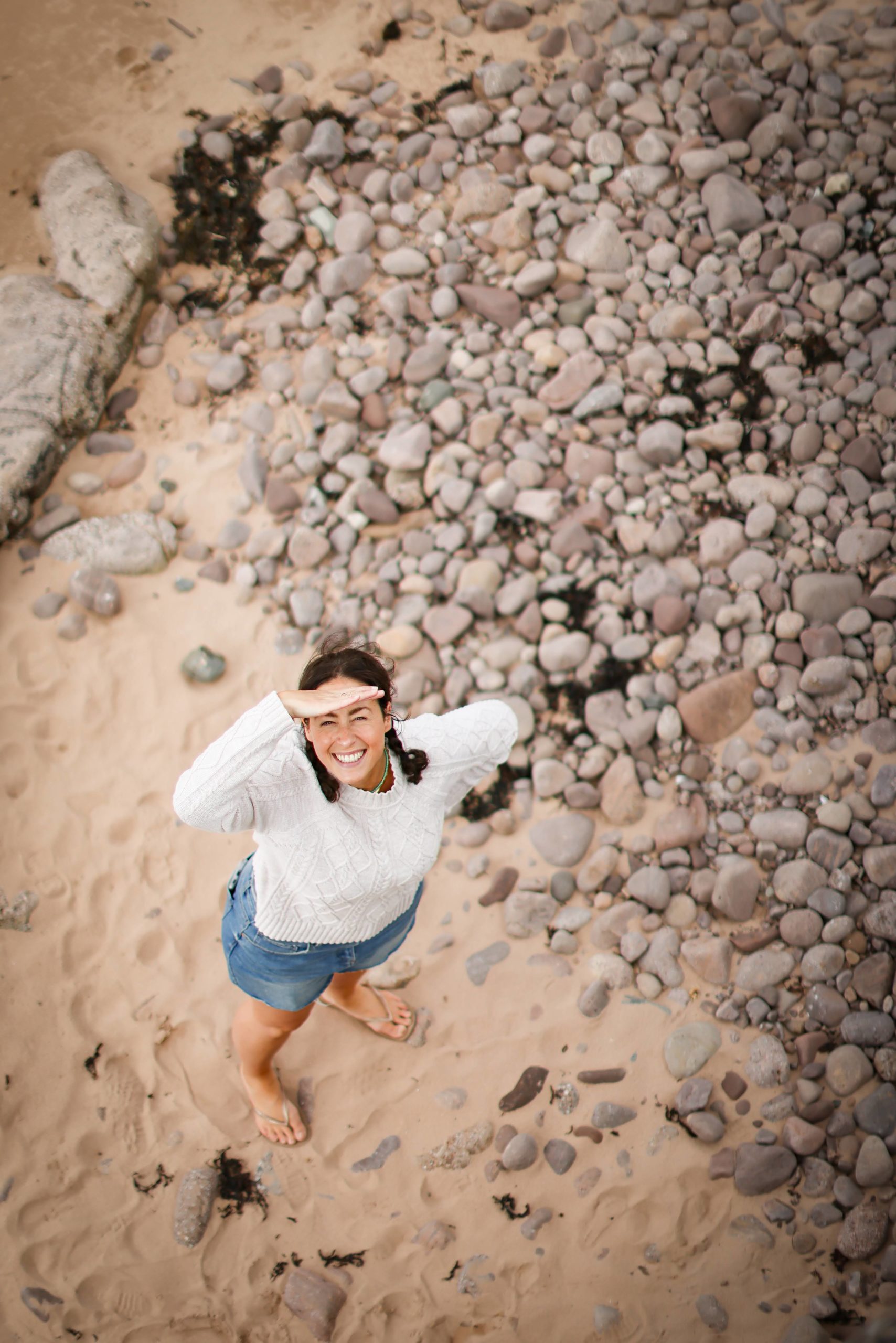 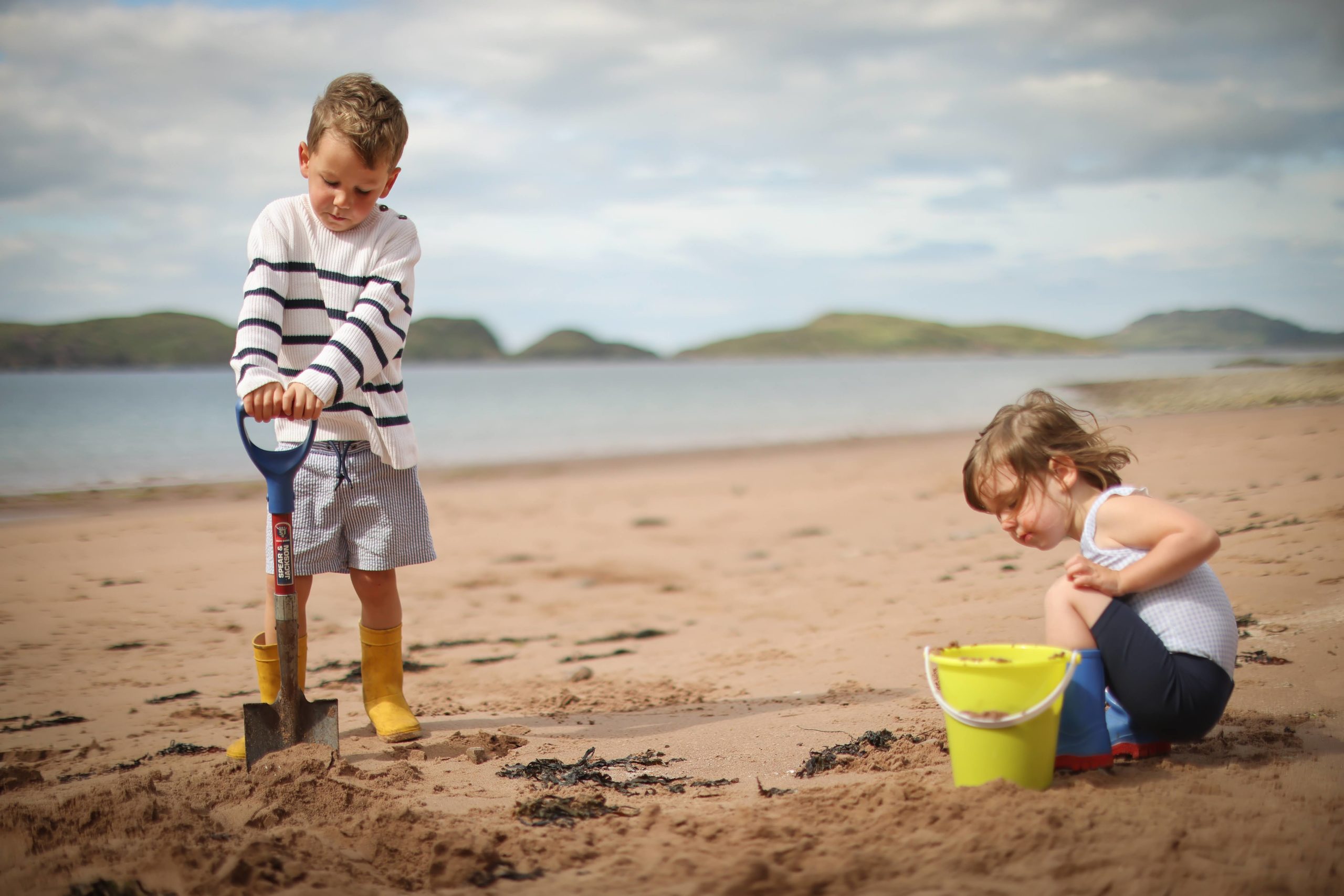 Meanwhile Achanhaird is ten minutes by car in the opposite direction, with a car park (often full) and a much easier decline to a huge sandy bay, with a long shallow shore (much less cold than Badenscallie) with gorgeous turquoise waters so transparent you can see your toe nails through it. There’s a rocky gulley filled with smooth stones, another lovely little spot to explore. This beach is much more exposed, and therefore susceptible to the elements – my advice would be to find a cluster of rocks to shelter behind, or risk trying a pop up tent/wind breaker. This is a beach ideal for sunbathing, frolicking in the water, and boarding when consideration is given to safe conditions such as high tide/wind direction.

If you happen to be on a boat or have access to the islands, Kris tells me one of the best beaches in the area is Isle Ristol. 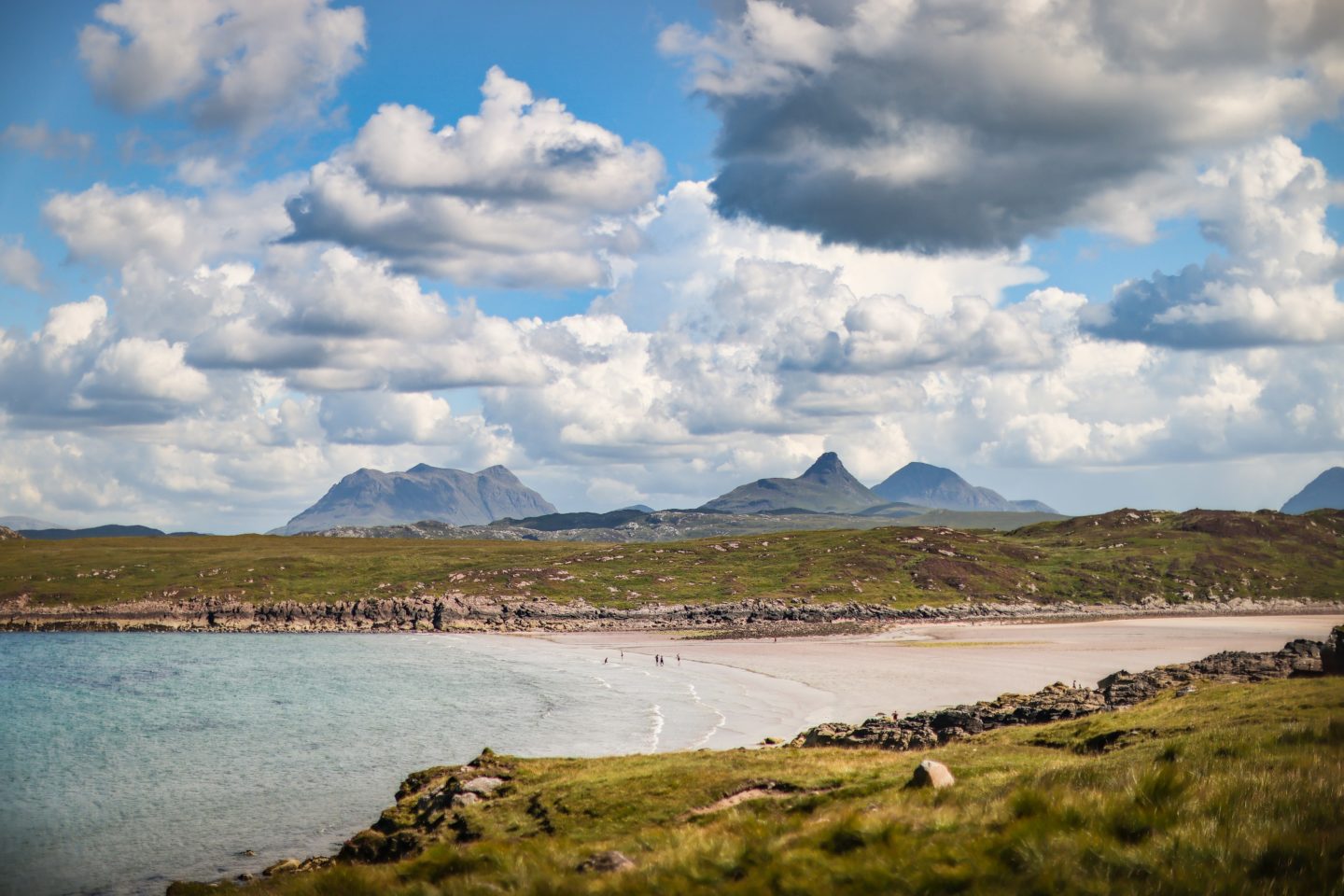 Ticks – go anywhere near the long grass and you’ll be covered, and that’s no exaggeration. Kris went into a field to get this shot of the old tractor and he came out with ticks all over his legs, right up to his hips, which he spent ten minutes frantically trying to get rid of. If you have dogs, you’re guaranteed to find at least one tick on them. Either way, make sure you have a tick remover or two with you.

Deer – they’re pretty much viewed as vermin up north, there are so many of them. If you’re travelling at dusk or night go slowly, and by day just be careful in the areas signposted because they really are likely to appear out of nowhere. If you’re at home with a good view, have your binoculars at the ready because despite the bad reputation locally, we think they’re really quite special to see.

Midges – seriously, they’re nippy little b*stards and will come out when it’s still or damp. Hope for a light breeze, as that will likely keep them at bay, but if not stock up on some Smidge (they also do a midge forecast), which actually works against ticks too. 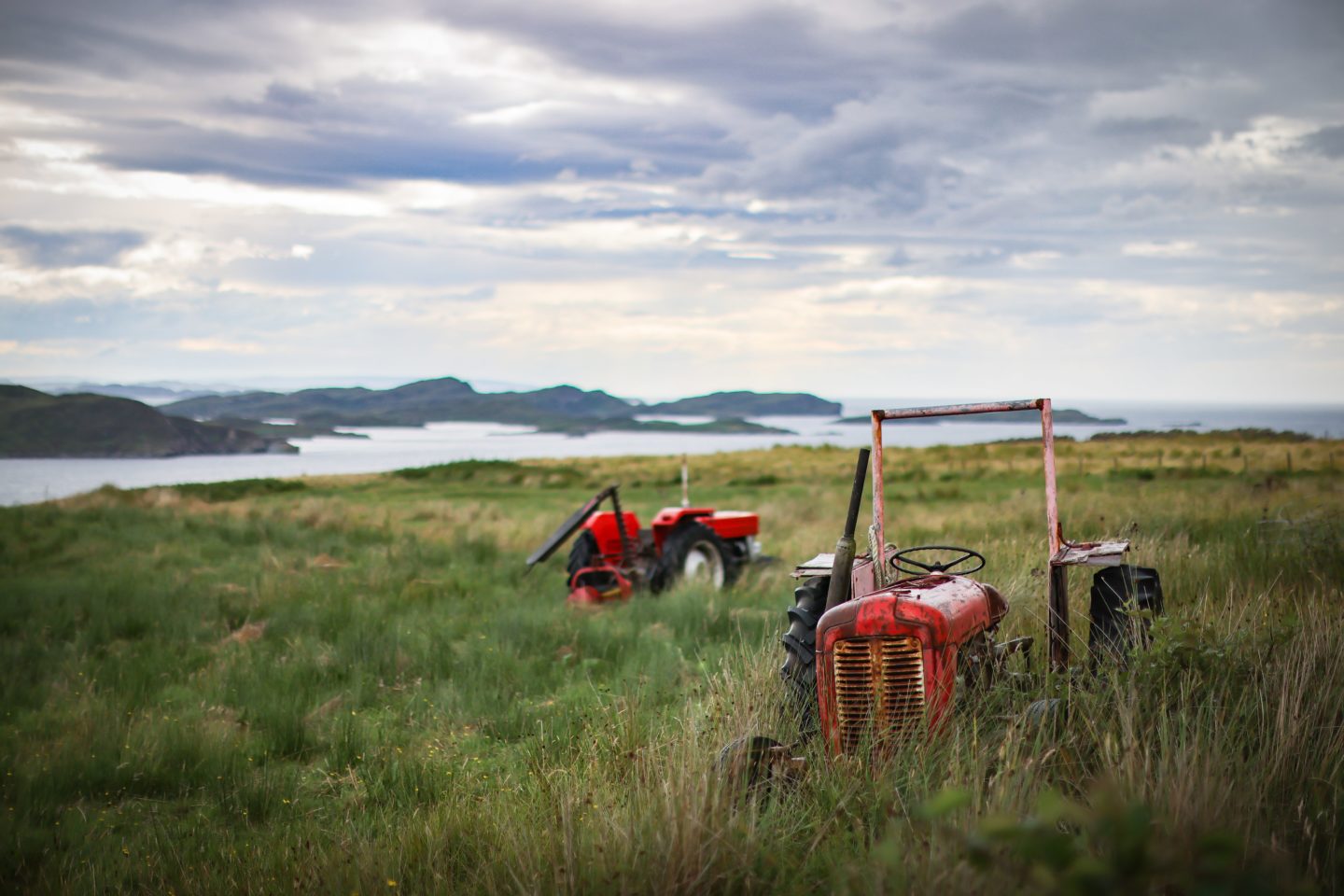