As most of the world will be aware by now, Dundee is fast becoming one of the UK’s most recommended cities to visit. By and large this is, admittedly, due to the V&A museum which opens this weekend (stay tuned for a sneak preview inside the building later this week) but there are many other reasons – both old and new – why people should list Dundee as one of their next minibreak destinations. One of those reasons is the relatively new Hotel Indigo. Dundee hasn’t really had a great city-centre hotel scene – the most obvious was The Apex for many years, joined by Malmaison when it opened in 2014. Lately, more hotels have sprung up in anticipation of the tourism being predicted for the V&A but the most exciting is certainly Hotel Indigo, a former jute mill which has great views of the city and features the work of Scottish designers within its rooms. In addition, its restaurant, Daisy Tasker (named after a much-loved weaver who convened social gatherings for the mill workers), boasts a Masterchef semi-finalist as its head chef. You can imagine how quick I was to book a table after being invited to review the restaurant.

On arrival, we were greeted by a hostess with a beaming smile who showed us to our table, a chic booth made up of black chipboard and dark teal velvet seating. Very private and perfect for a romantic meal, though being hidden from the centre of the restaurant did mean some of the atmosphere was lost. The restaurant itself seemed fairly lively with the sound of chatter from other diners, who were seated at a combination of free standing tables and chairs and tables running along a length of sofas. The lighting was cool – three segments of statement lights ran the length of the restaurant. Above the booths were metal lamps not unlike an Anglepoise in design; down the centre were dozens of balls glowing white, and across at the other side was a trio of enormous lampshades wide enough to fit two or three people underneath. Black pillars led the eye up to a bare, brick ceiling decorated by silver piping to provide an industrial, authentic vibe, while the plush velvet sofas and chairs in rich tones provided a bit of luxury. The large space was finished beautifully by the bar, which sat at the top, decorated by bottles and spirits including a Dundee-brewed gin.

We ordered a cocktail and a mocktail, and both were good and reasonably priced (around £7 and £4, respectively). To start, I ordered the Arbroath smokie chowder (£6.50) and he ordered the venison tartare (£8.50). We agreed they were both good; the chowder was smooth, creamy, and the charred leeks brought out the seasoning within the distinctive but not overpowering smokie flavour. The venison tartare was served with poached quail egg, pickled onions and beetroot – even decorated prettily with a deep pink beetroot dust – and it was very good, though perhaps looked better than it tasted. 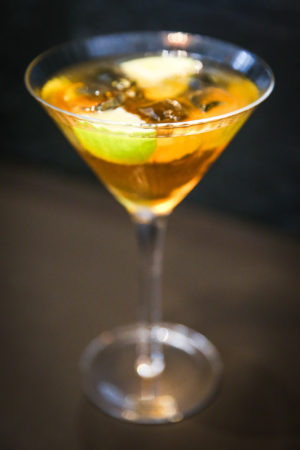 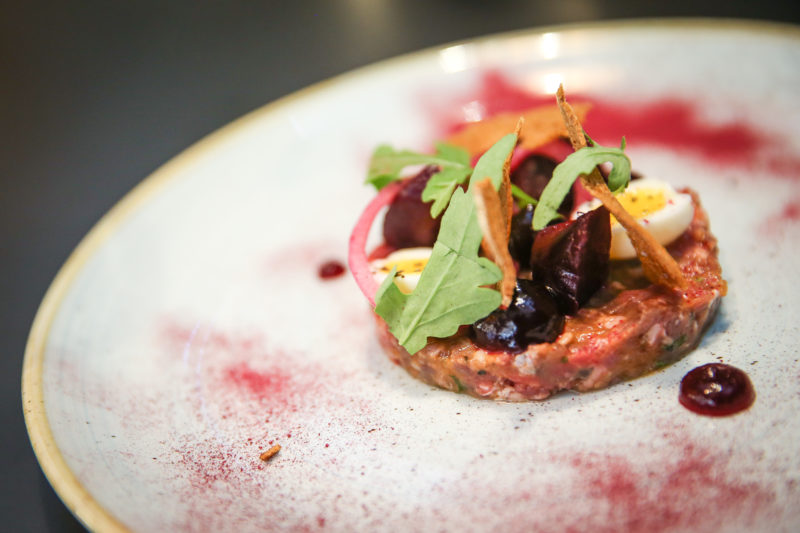 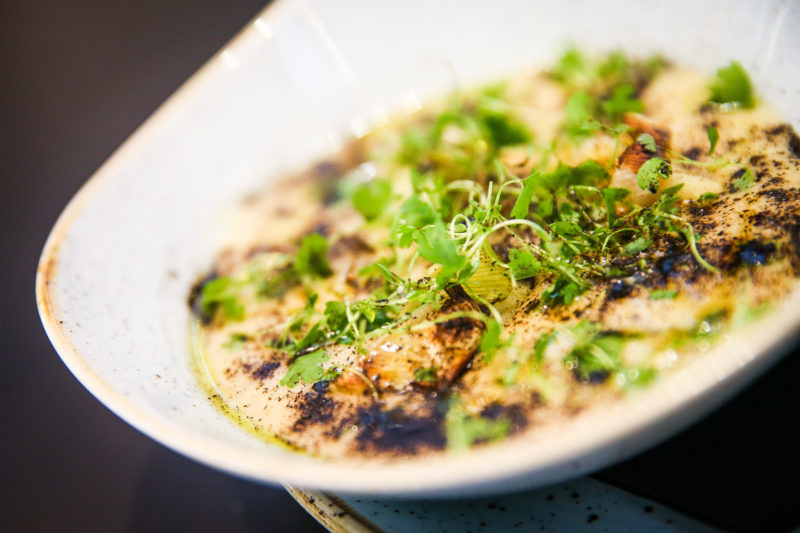 Next, it was lamb shoulder with cauliflower cheese, peas and mint (£22.50) for me, and cock-a-leekie chicken (£14) for him. My lamb was incredible – it was tender and fell away easily, melting instantly in the mouth to release all the flavour. Accompanied by peas, beans, miniature carrots and cubes of potato, it looked so colourful and pretty on the plate, and the mint was the perfect finishing touch. The chef – Stewart Macaulay aka Macca – served the lamb and poured a tiny pot of gravy over the food, which tasted amazing (apparently there’s red wine in there, oops). The cauliflower cheese purée was a nice touch and added a sense of indulgence to an otherwise fresh dish, due to its creamy consistency and flavour.

The cock-a-leekie came with mustard and bacon, and plenty of fresh, seasonable vegetables. When I asked my husband, he said it was totally amazing and he loved every bite – the chicken was beautifully cooked (slowly over six hours at 64 degrees) and he said there was just enough sauce to complement the dish rather than drown it.

I couldn’t do a review of a restaurant and not finish properly by including a dessert – I mean, I did it for you guys! We shared a Dundee sticky pudding with toffee sauce and clotted cream ice cream (£6), though I did seem to eat most of it. The sponge was super light and fluffy, the stickiness provided by the modest helping of toffee sauce and chocolate/toffee chewy topping – I’m not sure what that was but it was yum. This was sticky toffee pudding at the highest end of the spectrum.

Finally, we finished with a hot chocolate. The waiter had been telling us all about Macca’s amazing hot chocolate, which he described as ‘liquid love’. How could I resist? I am a totally chocoholic, and love a good hot chocolate, so I decided to put it to the test. Macca makes the powder himself with over 70% dark chocolate and egg yolks, a tiny bit of steamed milk and some cream. Yes, it’s as bloody good as it sounds and I’d go so far as to say it’s the best hot chocolate in Dundee by a mile! Please don’t go to Daisy Tasker without trying one, whatever time of day it is.

If you enjoy fine dining without the stuffy atmosphere, this is the restaurant for you. The staff are attentive, friendly, knowledgeable and happy to have a chat with guests. No reqeust is too big or too small, and the food is excellent. The price point is varied, but above average – however, given the head chef’s credentials and level of food being served, it’s reasonable for a treat. It’s worth noting , that you should prepare to relax and enjoy – there’s no rushing at Daisy Tasker, which is fine because the food is worth taking time out of a busy schedule for. 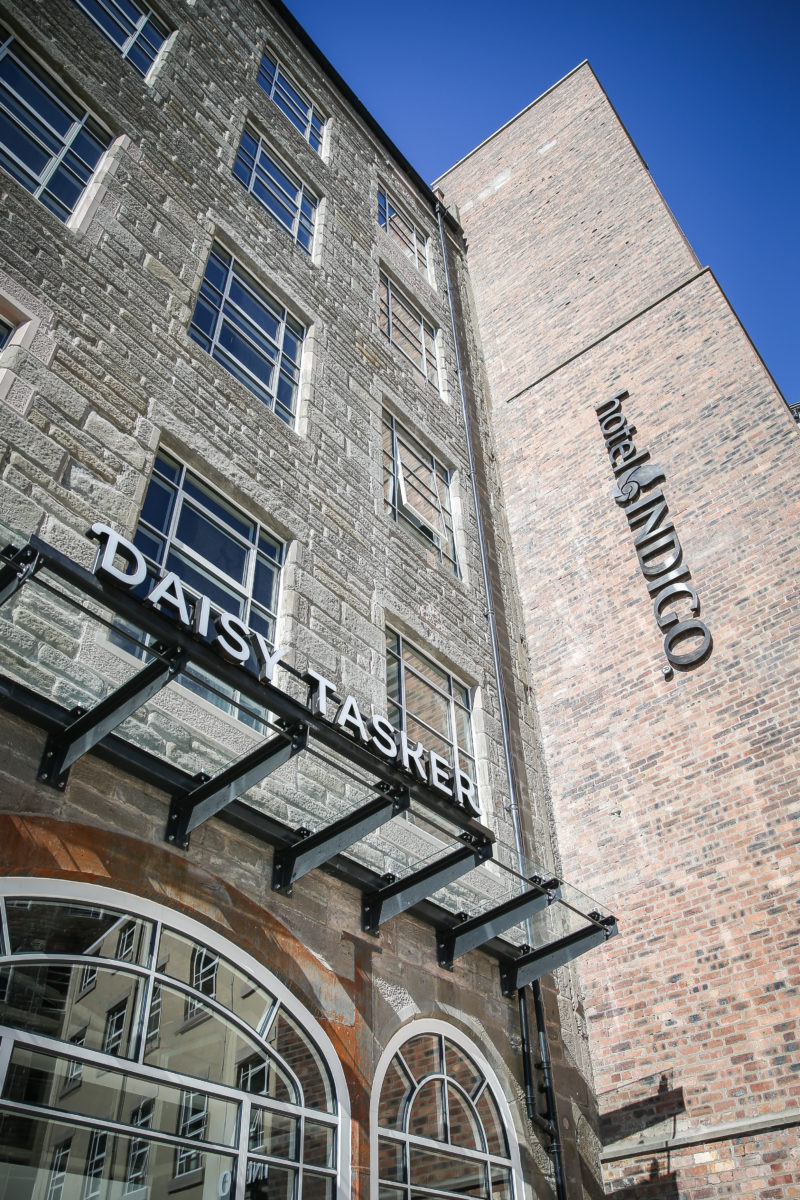 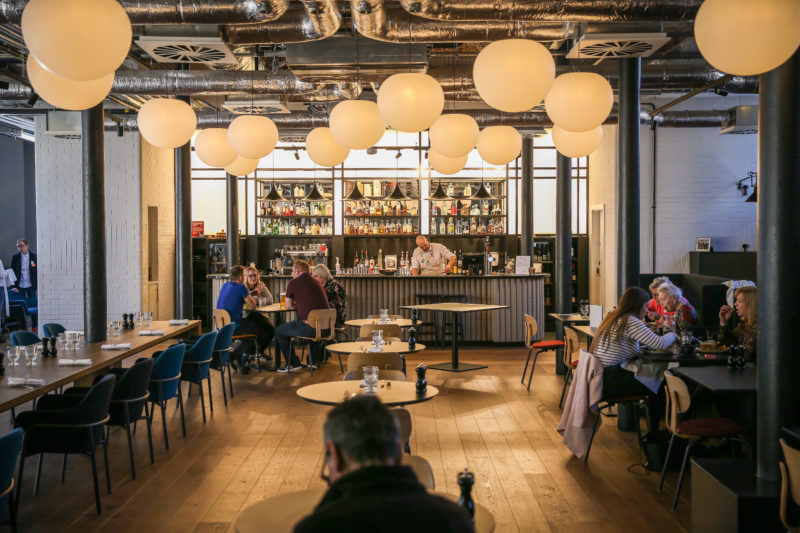 The lunch at Daisy Tasker was provided in exchange for a review. With thanks to Hotel Indigo and Daisy Tasker for hosting us.