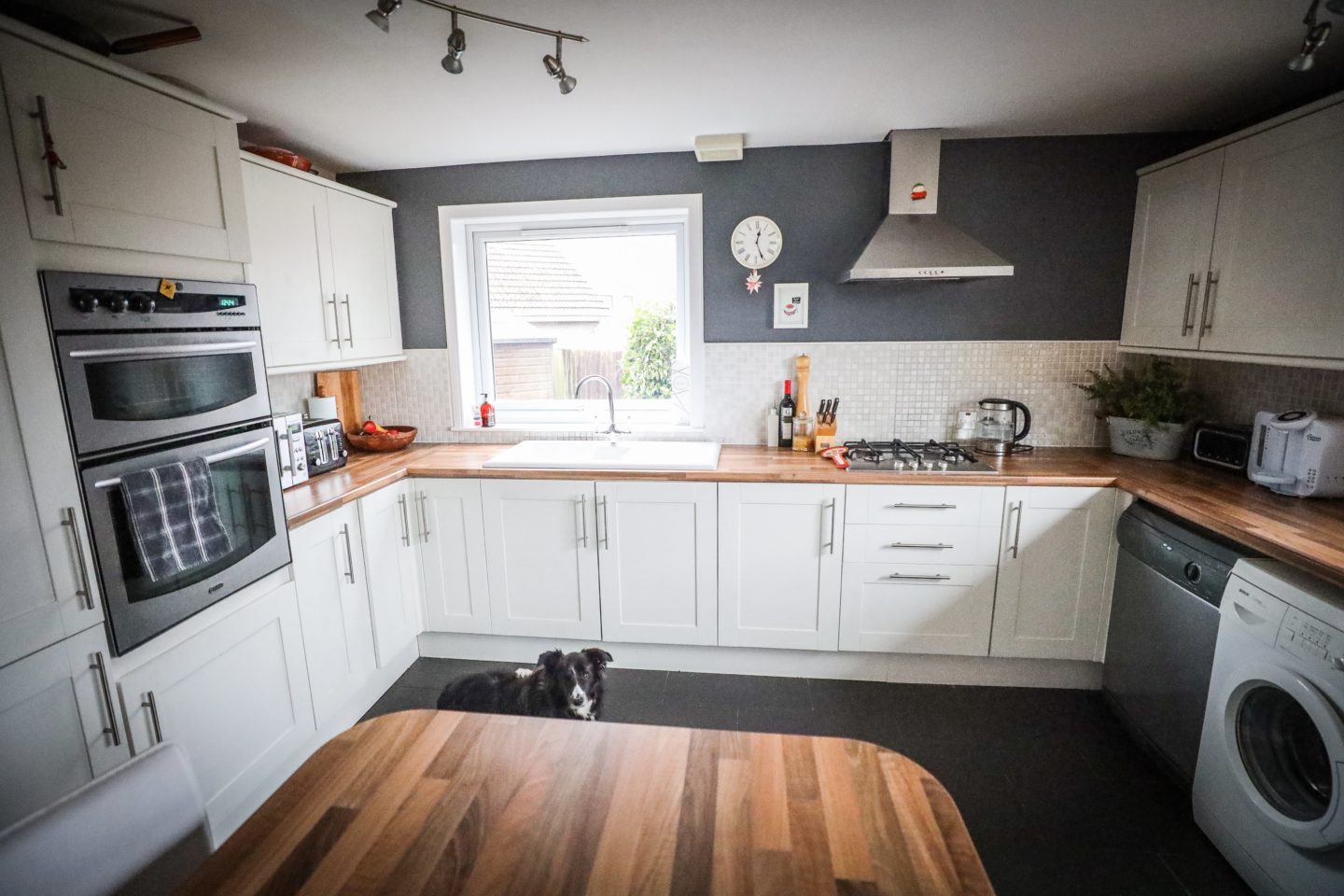 What do you do when your kitchen starts falling apart, but you don’t have thousands of pounds free to replace it? Work with what you already have and get stuck in.

Some background. Our kitchen was over 10 years old. It looked a bit dated, but that didn’t feel like a good enough reason to spend any money on it when we have two young children and cash is more limited than it once was. However, it turned out the decision wasn’t up to us.

In late autumn we discovered that the middle section of our sink (we had a separate round sink and draining board) had been so soaked while washing dishes that the worktop had gone completely rotten. The discovery was made when I went to clean the cupboard under the sink and discovered a basin used to store ‘stuff’ full of black, stagnant water.

This left us with no choice but to replace the worktops, which also meant replacing the sink and tap. (We worked with Worktop Express in a gifting capacity, and paid for the sink.) We chose a walnut laminate worktop to match the peninsula we added to the kitchen in late 2017, for which I had chosen the worktops I wanted rather than the ones I had. Some might call that stupid, I call it fate. The sink was from Victorian Plumbing, tap included, which kept the cost down a bit.

Sounds okay, right? Not quite. We had beech laminate cupboards. Personally, I don’t think walnut and beech really like each other, they fight for the limelight, each trying to out shine the other but neither really reaching their full potential. The beech had to go, but how could we create a modern, fresh kitchen without replacing all of the perfectly good cabinets? Paint them. We used Annie Sloan who had also agreed to work with me on a gifting basis. We chose Pure white chalk paint.

One final update was the back wall and woodwork – we painted the upper back wall a dark grey and freshened up the white woodwork, to give the kitchen a much more ‘finished’ appearance.

The rest of this post goes into more detail on the different things we changed, and at the bottom are some before and after shots as well as a breakdown of the cost – even with the gifted items this kitchen was achievable on the smallest of budgets. 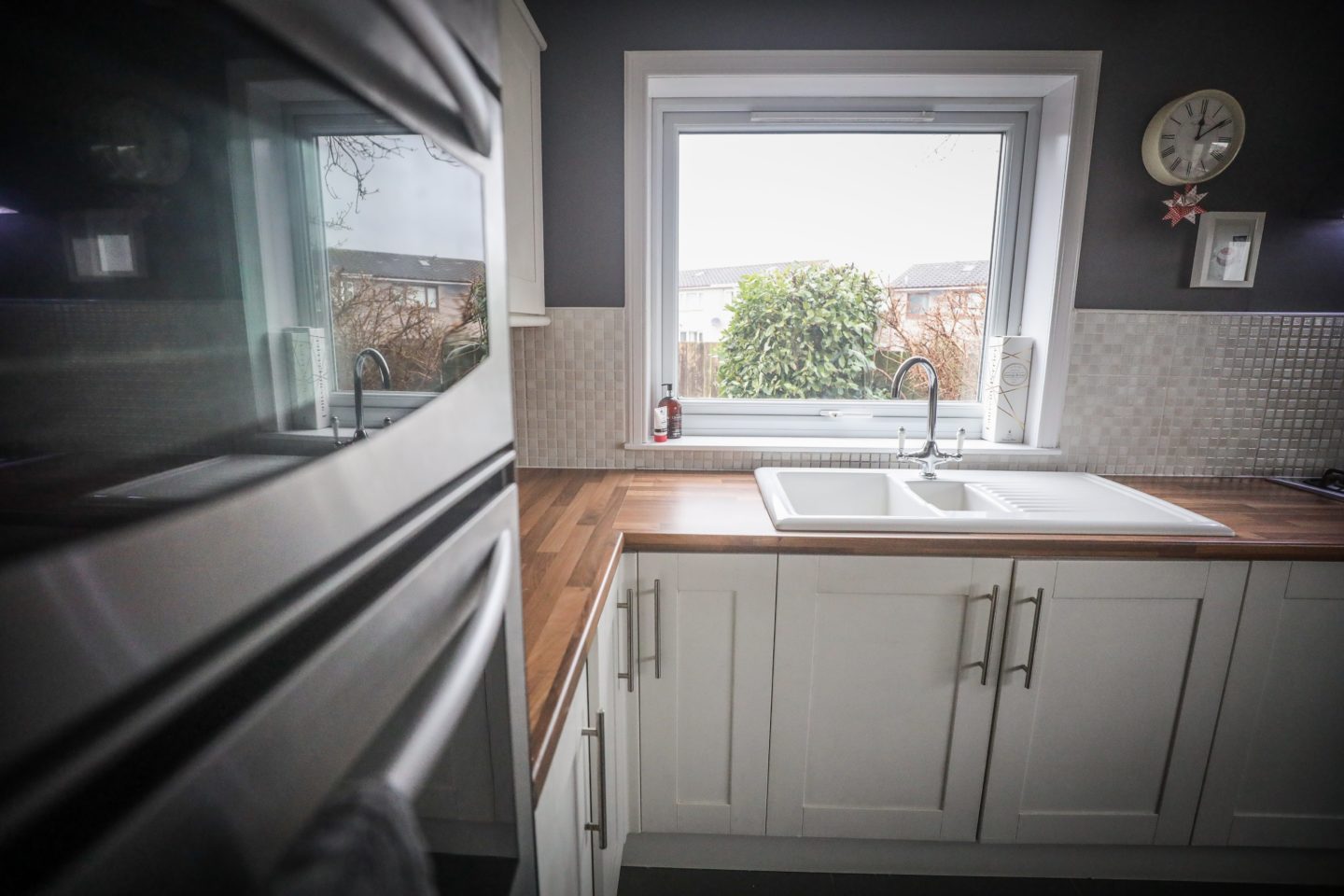 The sink is probably my favourite thing, probably because it was a total nightmare before we changed it, and it’s where this project all began really. As I mentioned, we had a really badly designed sink – it was circular with a matching draining board. They looked neat but the downside was that a lot of water would gather between the two sinks and around the bottom of the tap. No matter how much we tried to mop it up we still ended up with rot. We have a dishwasher but don’t often use it, so the past three years have been spent around-the-clock at the sink washing baby bottles and dishes. Also, it’s pretty tricky trying to balance dishes on a circular draining board.

Both of us had always fancied a traditional farmhouse sink as a feature, but they’re pretty pricey and it would have had a knock-on effect on our worktops and cupboards, which – along with re-tiling – we didn’t have the time or money for. We needed a fast turnaround because of the amount of time spent in the kitchen these days, so instead we chose a white ceramic sink with a 1.5 basin and draining board from Victorian Plumbing – a similar look without the hassle. The taps came with the sink which saved a bit of money, I think we paid £209.95. If you’re interested, I think it’s on offer now. One thing to note is that dishes break a lot more easily with a ceramic sink. RIP to a mug, a plate and a wine glass – all in the last three months. 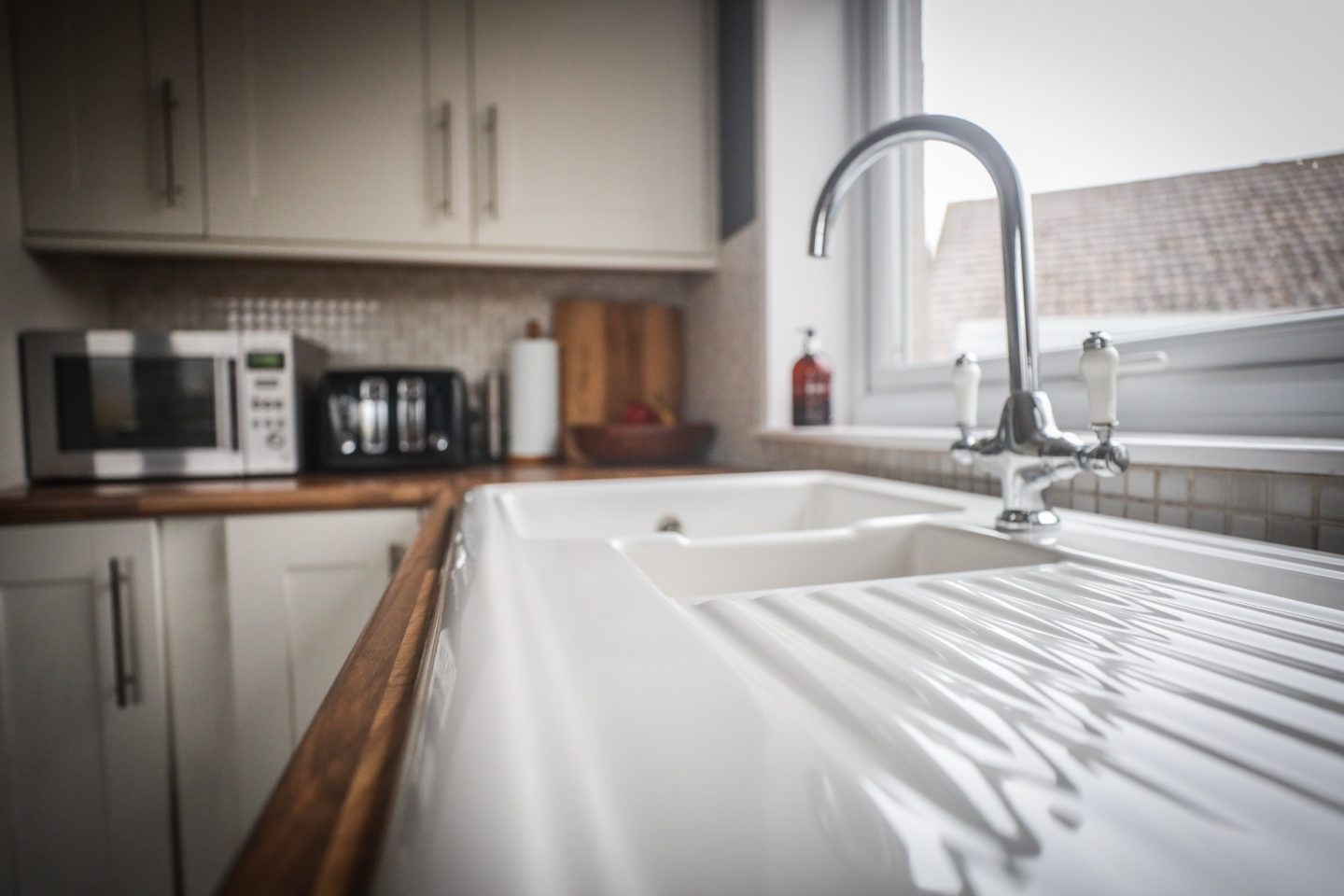 As soon as we started researching, I knew I wanted to cover this journey on the blog. I think showing how to update your home on a budget is really important, especially given how much waste there is in the world with us all wanting everything new every few years. I am certainly guilty of this so in some ways, it’s been great to have a very strict budget to work with.

I asked Worktop Express if they would like to contribute to the post and they were keen to be involved, kindly gifting us their walnut laminate worktops. We chose laminate over solid wood becuase we wanted whatever would be easiest to maintain. Our joiner came one wet Saturday in November and fitted them all in a day, including cutting the worktop around the sink and hob.

Worktop Express were brilliant to work with, and they kept in touch throughout the ordering and delivery processes. The worktops themselves are excellent quality – we’ve had them now for four months and (touch wood, pardon the pun) we have had no problems at all with maintaining and cleaning the worktops. They look and feel like solid wood and the quality is superb. Honestly, I couldn’t be happier with them. When I think about the cost of the worktops being just £180 and the joiner £150 (mates rates), what a difference some new counters can make to your kitchen. Seriously, if you fancy a change but not an entirely new kitchen, consider browsing Worktop Express’s collection. (They currently have 15% off all orders over £500.) 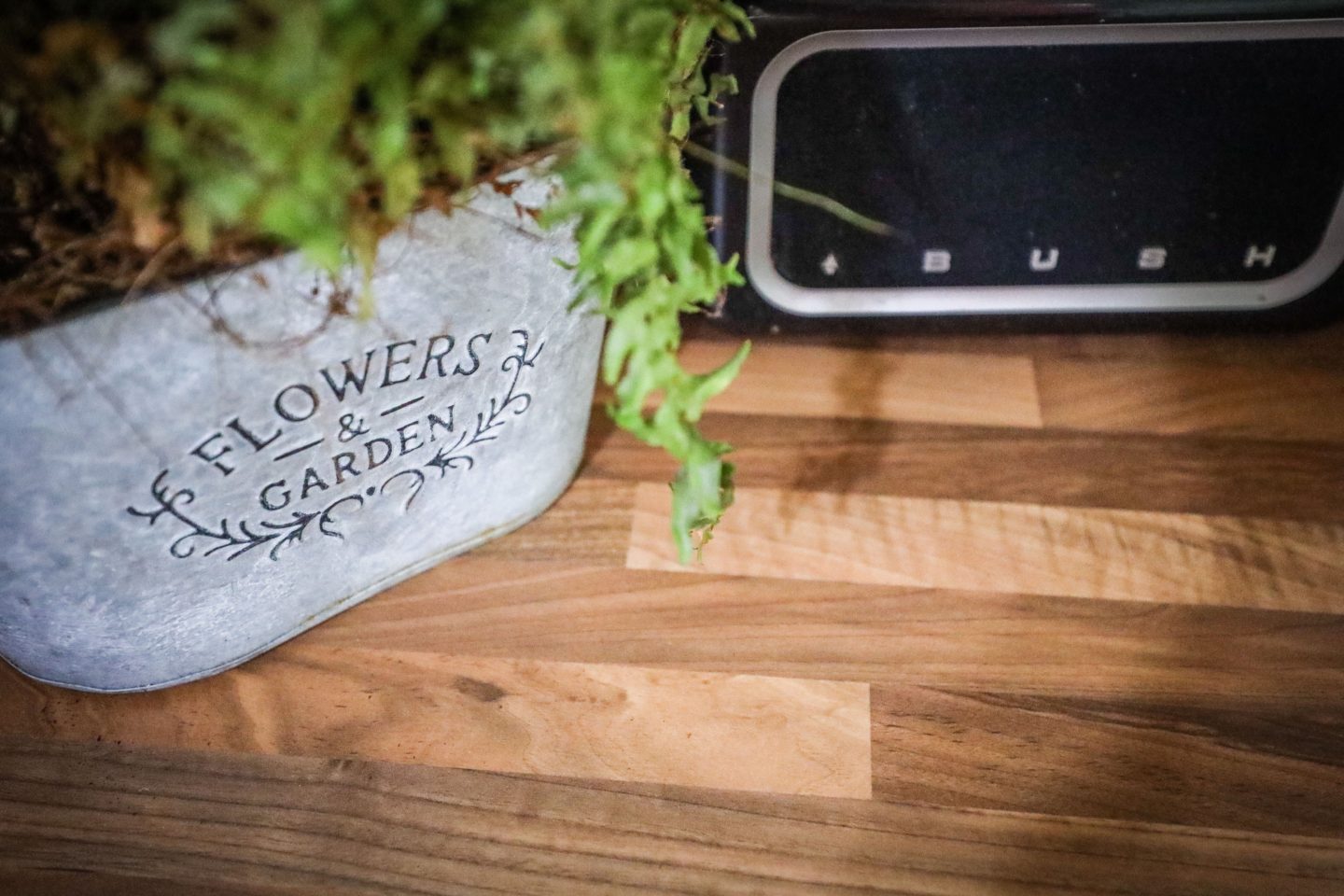 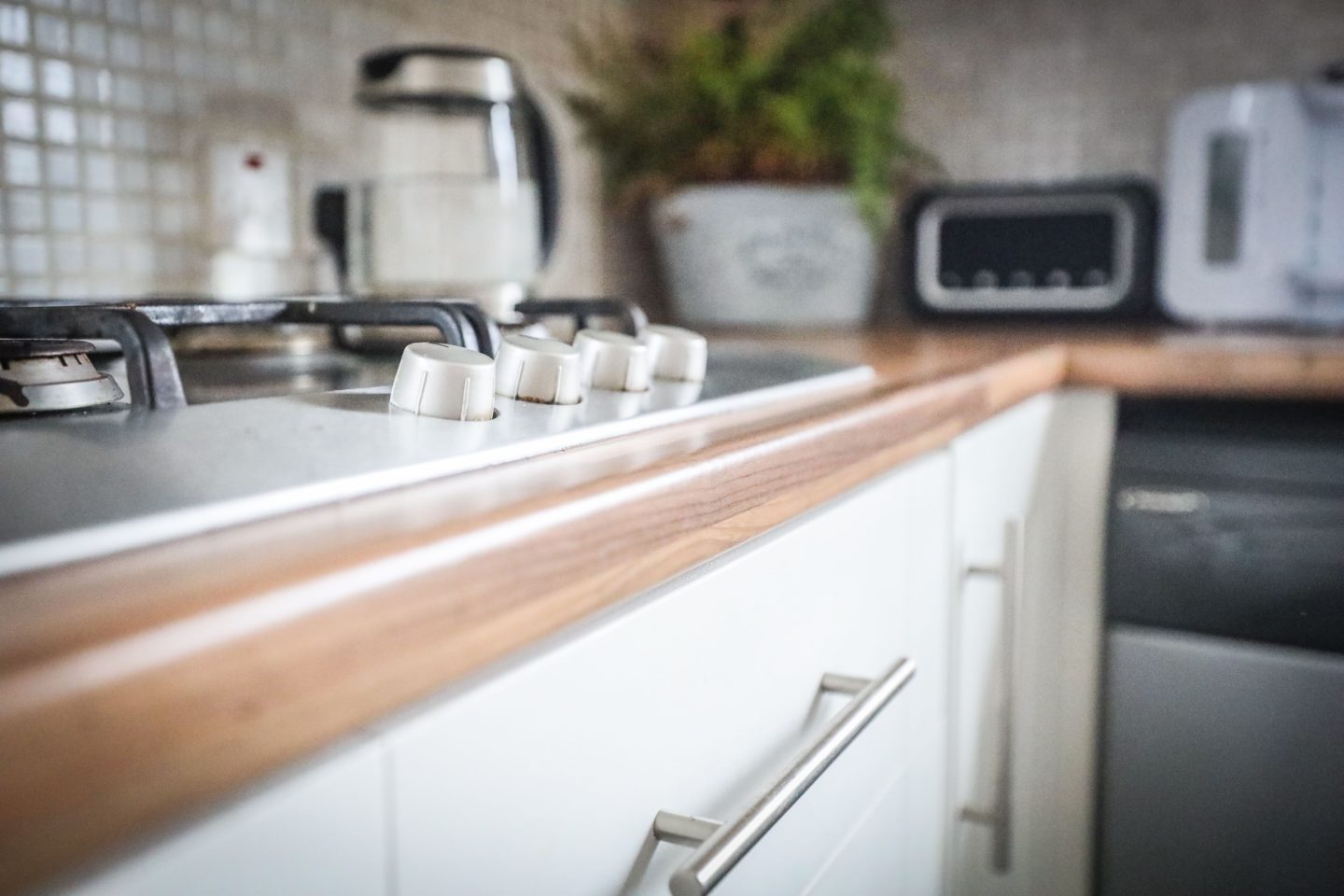 Despite the sink being the straw that broke the camel’s back, I had been toying with the idea of painting our kitchen cupboards for a few years. It seemed like a quick fix to a problem that was purely cosmetic, but when I enquired about having them spray painted by a pro I was disappointed to learn it would cost around £1800 – that was in 2015/2016.

So, I looked into painting them ourselves and remembered Wendy’s kitchen makeover in which she used Annie Sloan chalk paint – it looked amazing so when we knew we were getting the new sink and worktops I asked Annie Sloan if they’d like to work on the project too. They agreed and sent over a few samples for us to try. We loved Duck Egg Blue and Athenian Black but played it fairly safe with Pure, a brilliant white, to contrast our dark grey floor tiles. I think if we’d chosen a white worktop then I’d have gone for the dark paint.

The paint arrived swiftly without any problems, along with some wax for sealing it with. This is where my husband stepped in and he took on the thankless job of painting and sanding each of the 16 cupboard doors, three drawers and kick boards, twice – on both sides – before finally sealing them with the wax. In total this took him around three full days of work, with some help from his dad. It was a tiresome, physical and dull job but it has been so, so, so worth it – the kitchen cupboards look brand new. Annie Sloan’s paint was easy to work with and so far has been easy to keep clean with a few little wipes here and there most days. All I can say is, thank goodness we had a deadline of the family coming for Christmas! 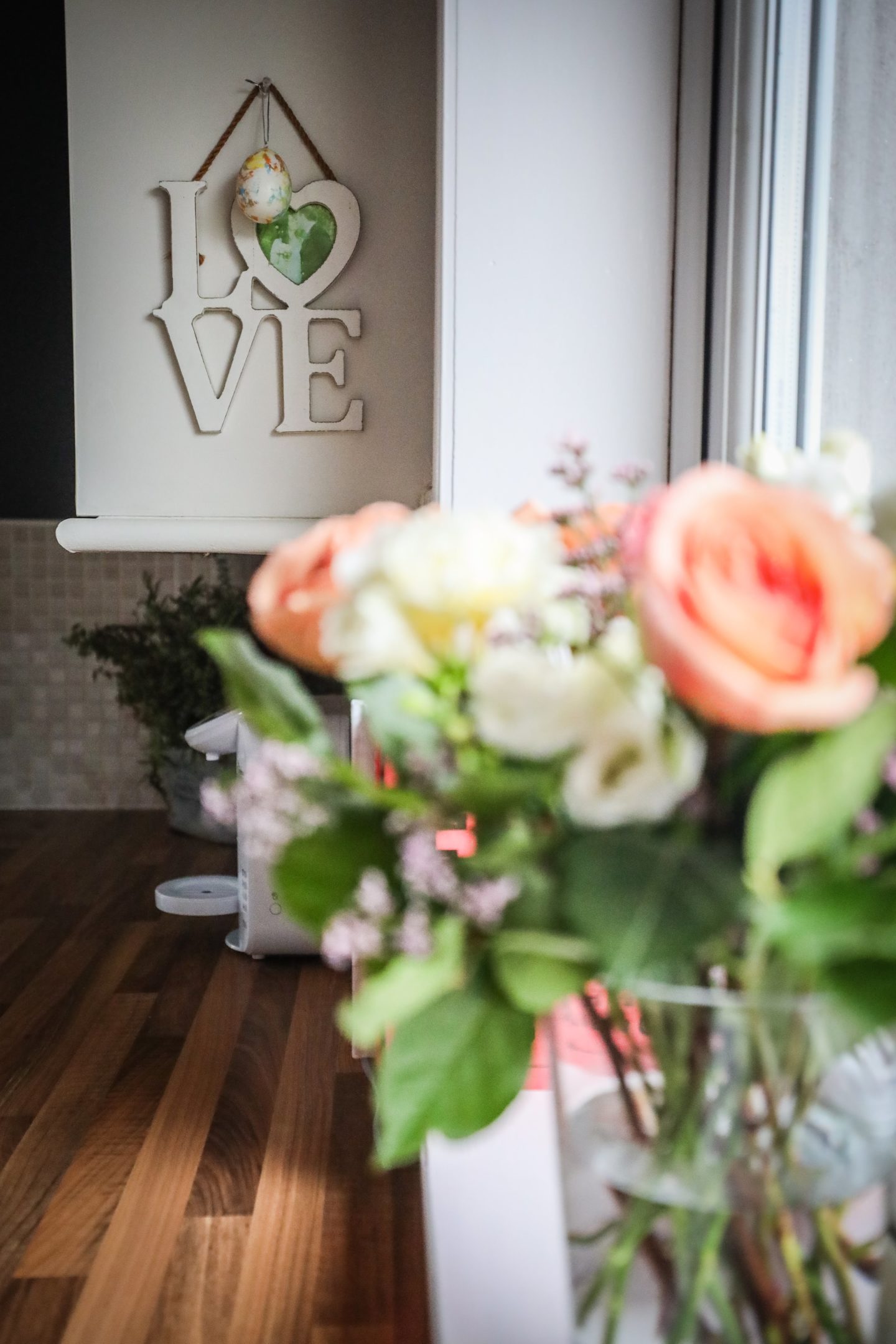 The transformation of our kitchen has been really quite surprising – what a difference a new sink, new worktops and freshly painted cupboards has made. With the amount of time we are currently spending in the kitchen, it felt important to create a bright room that was a joy to be in. Some of my favourite moments are spent here – breakfast time with all of us around the table, Nathan balanced on the stool and Kittie in her high chair, the dog lying by our feet. Making a coffee or babyccino has become a real treat, and I am proud to keep it cleaner and tidier than I ever have before in the 12 years we’ve lived in this house.

Even washing up is no longer a chore. 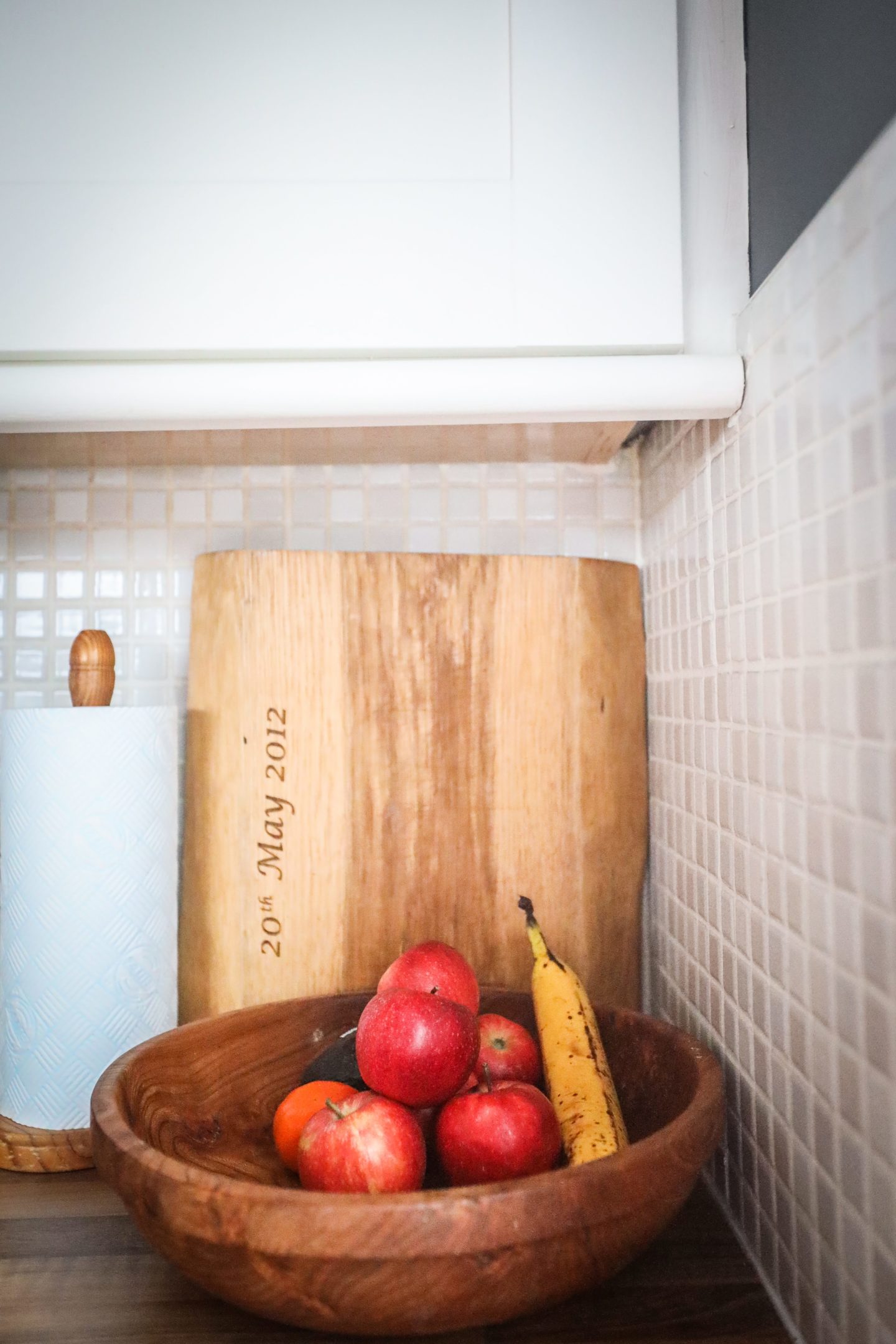 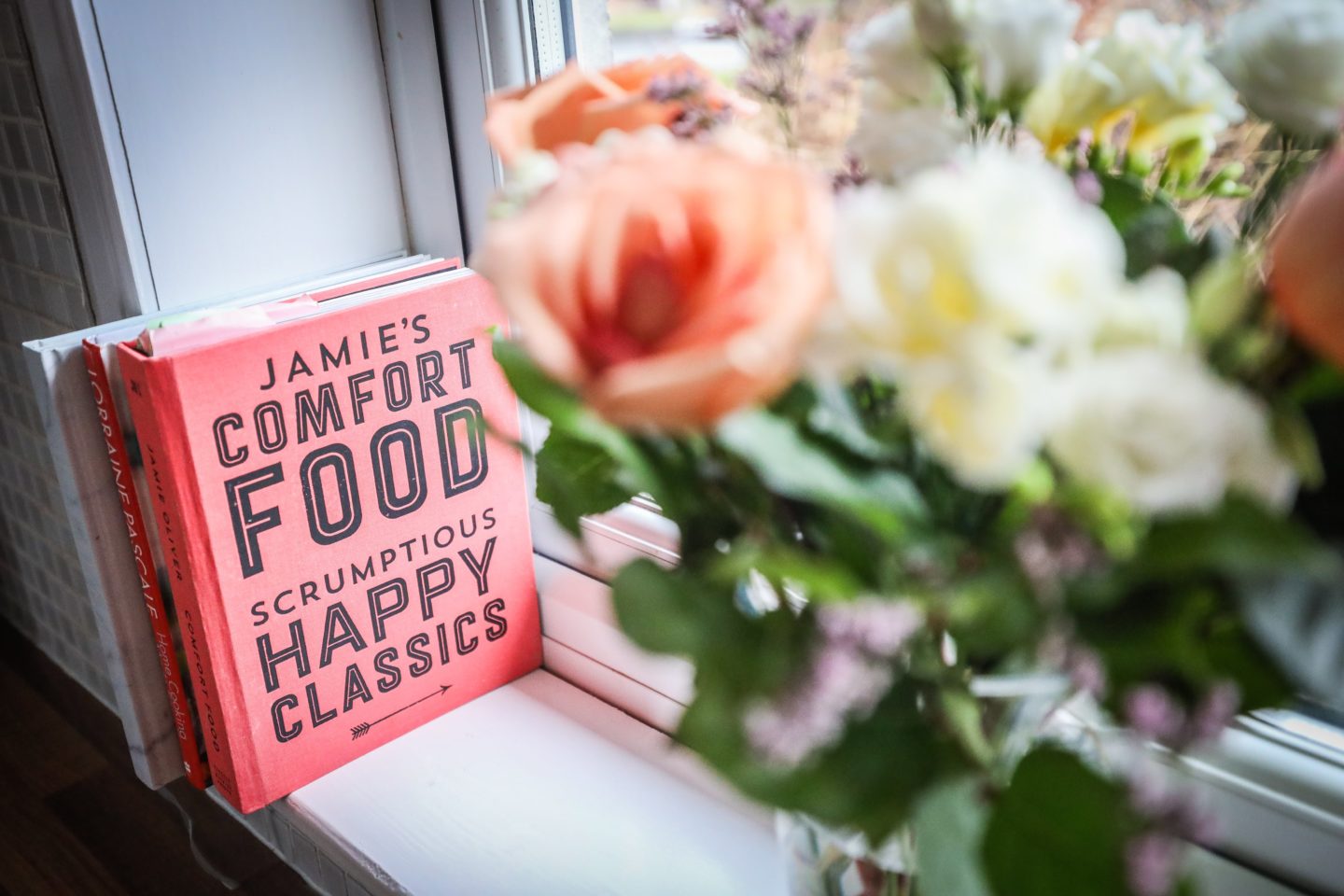 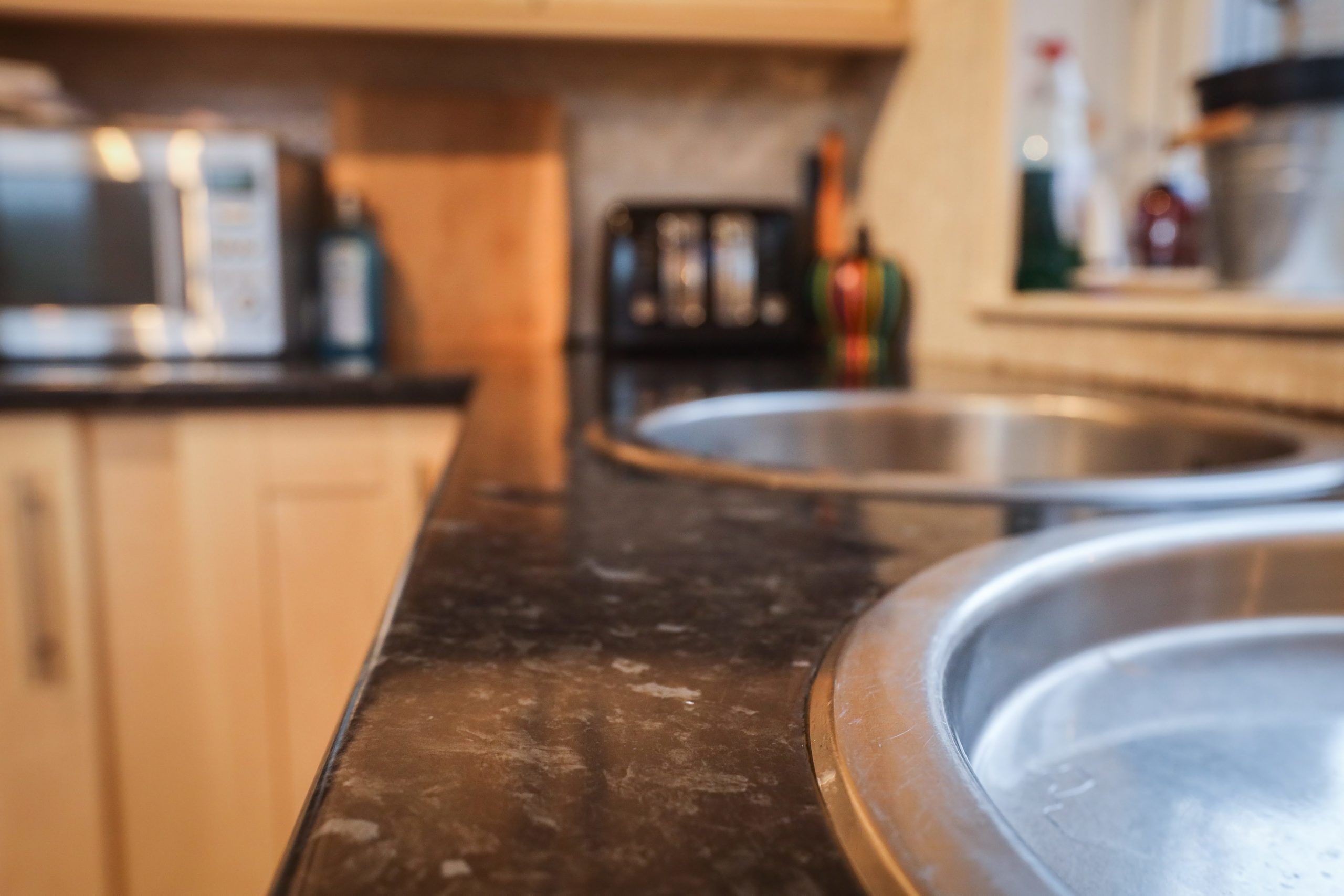 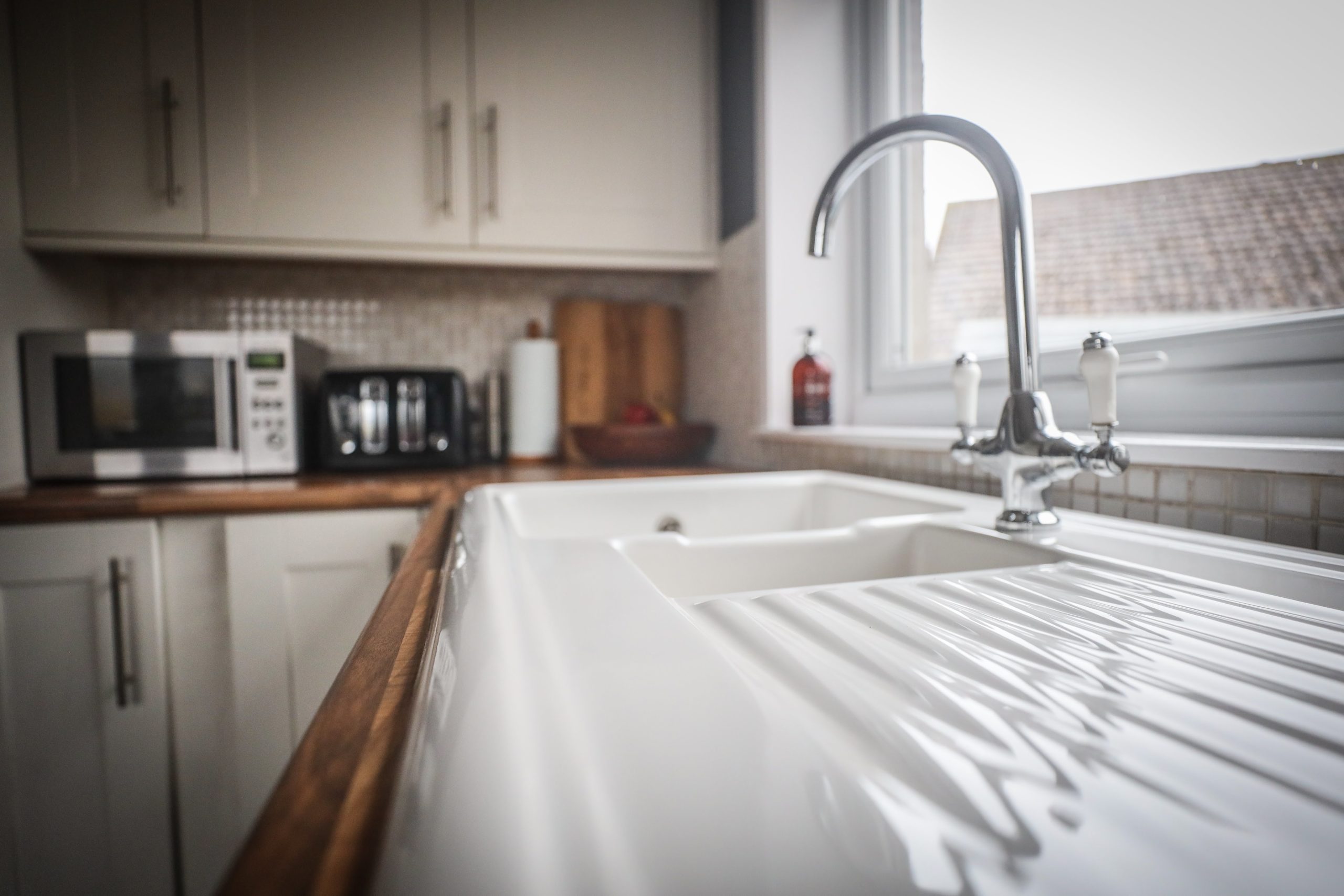 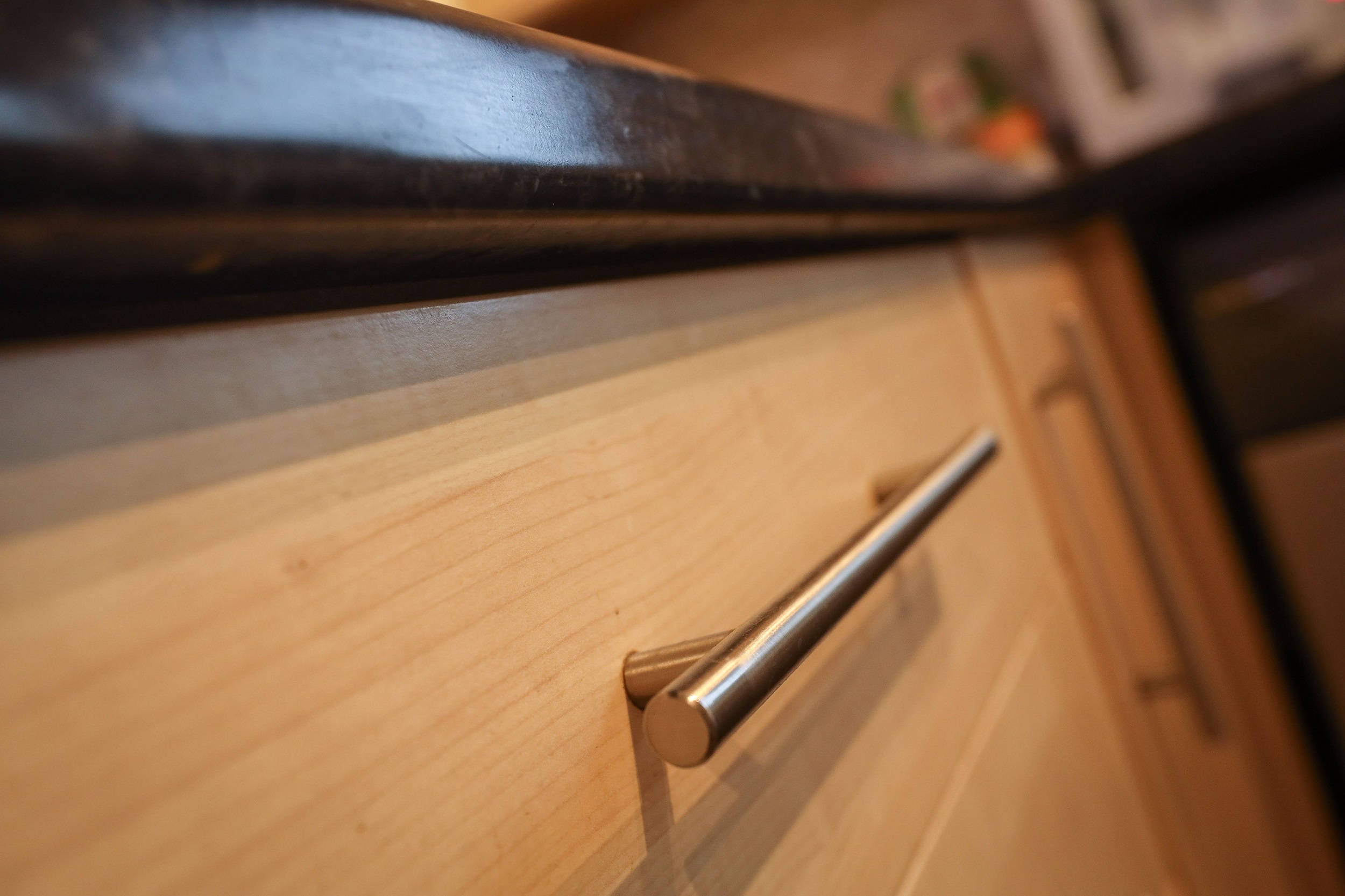 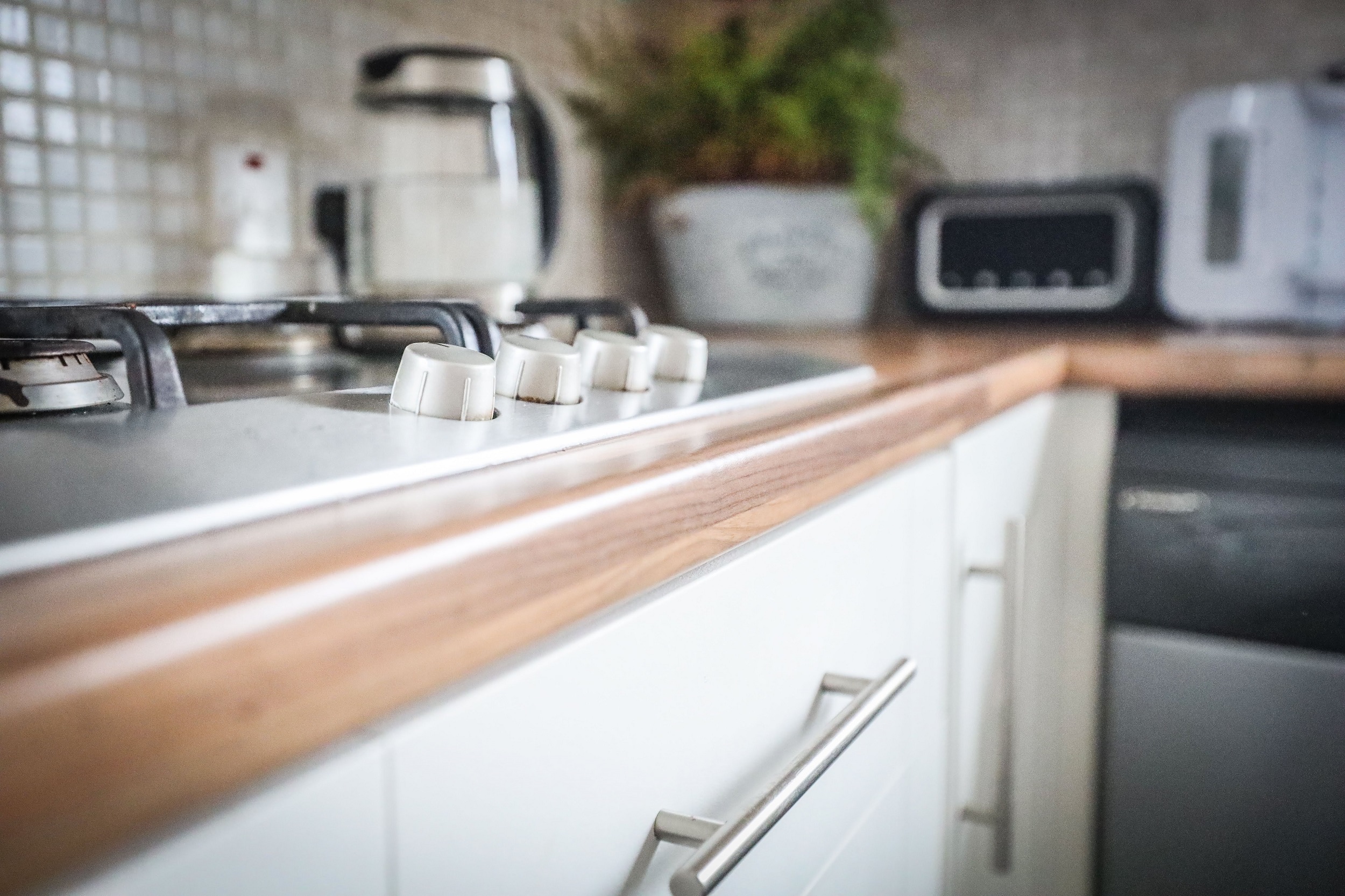 With thanks to Worktop Express and Annie Sloan for collaborating with me on this feature.